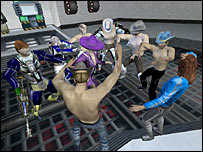 A real world cash card that allows gamers to spend money earned in a virtual universe has been launched.

Gamers can use the card at cash machines around the world to convert virtual dollars into real currency.

The card is offered by the developers of Project Entropia, an online role-playing game that has a real world cash economy.

The buyer, Jon Jacobs who plays in the game as a character called Nerverdie, is developing the space station into a virtual night club through which the entertainment industry can sell music and videos to gamers.

This entry was posted in Uncategorized and tagged Business and Economy, Games, Internet. Bookmark the permalink.